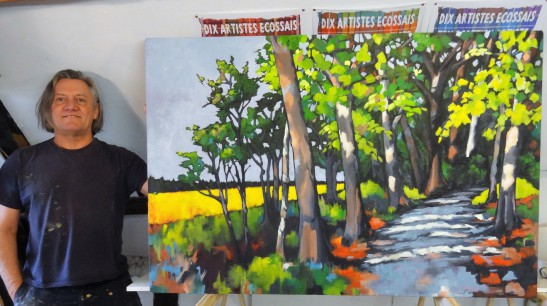 Lex returned to painting and drawing in 2002 and has gained a growing following who collect his strong portraits, sculptures and still lifes. His growing reputation has been highlighted with the receipt of the PF Charitable Trust Award, the major prize at the Visual Arts Scotland Exhibition at the Royal Scottish Academy. He produced the life size ‘Angel’ statue for Angel with Bagpipes on Edinburgh’s Royal Mile and one of his paintings is in the private collection of HRH, The Princess Royal.

He lives on the Crinan Canal in Argyll, Scotland and in Burgundy, France in the medieval village of Noyers sur Serein where he curates the annual ‘Dix Artistes Ecossais’ Exhibition and where McFadyen’s work is becoming increasingly influenced by the long periods he spends there.

If you have any queries or wish to make an appointment, please contact us:

Get social with us.